What does it mean to dream about snakes? (Dream interpretation snakes) 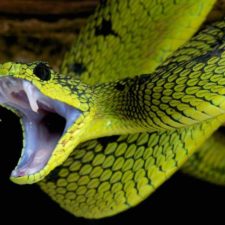 What does it mean when I have dreamt of a snake? /how to interpret a dream about snakes.

There are several angles on snake dreams – as described below.

Dreams of snakes as a symbol of our unconscious.

Some time ago I was in Singapore. I fell into a conversation with a woman who continued to dream of snakes that show up all the time – and her reaction in the dream is that she is struggling frantically to kill all the snakes.

She does not want to have anything to do with the snakes. At the same time she tells me that she has always been told that one should not engage with one’s dreams – that it is dangerous for your health!

So for me it is very obvious what this is about – she is fighting with all her strength not to engage in a dialogue with her unconscious. In my terminology, she refuses to listen to herself and what is actually happening in her. And surely it must be painful to spot all that one contains, but rarely so dangerous that you have to leave it! The dreams want to tell us something, and therefore one should not deny them.

Dreams of snakes as a symbol of instinct.

A snake is an animal, and when we dream about animals, it is often something instinctive; the animal-like in ourselves. The snake is also one of the very oldest animals, and therefore most primitive species. When we dream of a snake, it is often an indication that we may deny/block out some more deep and “primitive” layers of our psyche, and with snakes in our dreams, our unconscious tries to connect us with this.

For example, the fact that we dream of a snake we want to kill, may be a symbol that we do not face the fact that we sometimes are primitive and that we have some more “dark” instinctive layers in our thoughts and behavior. If we deny/reject them for a long time, it will typically be seen in our dreams.

How we handle the situation/meeting with snakes in a dream is a picture of how we in our waking life relate to these aspects of ourselves. Are we trying to kill the snake (and therefore deny these sides), or do we get in “dialogue” with the snake, i.e. “Respect” it? These snake-like sides of ourselves are potentially dangerous if we relate well to them, so it’s not that we should not be afraid of the snakes in our dreams – best of all, we need to somehow engage with the snakes.

It is about accepting and integrating these instinctual, dark and primitive aspects of our personality and behavior.

If we have good “communication” with snakes in our dreams, then this indicates a healthy and good connection to these aspects of ourselves – sometimes as a good communication between body and mind. My own first snake dream was very fearful, and to me the snake represented the meeting with the unconscious.

It happened immediately after I had really gone into working with my dreams. I was attacked by a green-yellow snake, but in the dream I threw a towel over the head of the snake, which is an okay way to deal with it if I say so myself …
–
When trying to understand your dreams it is important to know that your dreams are… your dreams. As such, you are the best person to figure out the true meaning of your dreams.

My online course “Unlock your DREAMlife” gives you a great foundation for understanding (and recalling) your dreams.
–
Dreams of snakes as a symbol of transformation.

Snakes shed their skin, and to have dreamt of a snake can therefore also be a picture of undergoing a transformation or important development in one’s life. It may be the transition from child/teenager to being an adult (which in dreams often appears as one loses one’s teeth), or it may simply be a fundamental change in the way you look at yourself and your life, and therefore also reflects in one’s thinking and behavior.

The snake as a symbol of something sexual.

Freud always saw the snake as a sexual (phallus) symbol and linked it with the idea of ​​the “primitive animal-like ” in man. If we see a snake in our dreams, according to Freud, it meant that it may be a picture of a possible sexual problem in us, perhaps that we let our “primitive sexuality” steer us too much, because of course there are limits to how much our surroundings “allow” us to live out our sexual desires.

Dream of a snakebite – an attack from within.

Dreams of snakes are sometimes a symbol of an inherent fear in us. Snake bites are usually toxic and if we dream that we are bitten by a snake, it is often an image of some internal destructive or outright deadly force/thoughts that make life difficult for us, but which we might not have spotted yet.

Adam, Eve and the serpent.

Finally, it is also worth remembering that in the Biblical telling, the serpent convinced Eve (who persuaded Adam) to eat the apple from the tree of knowledge. Therefore, the snake – an extension of the idea of ​​the snake as a symbol of the darker forces within us, can also be a picture of the deceptive/manipulative in us.

NOTE: Dreams are 100% individual, and when you dream about snakes, it’s almost certainly about something else for you than it is for your friend, who also dreamt about snakes. Dream interpretation / dream analysis is sometimes a difficult art, and a particular interpretation of a dream is only correct if you feel “affected” by it. Therefore, it is not certain that the above mentioned interpretations are relevant to you.