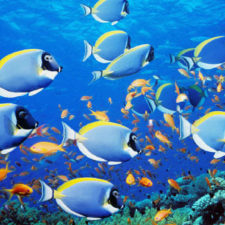 Interpretation of fish in dreams (whales, sharks). The ocean is often a symbol of a deep layer within our unconscious (in addition, see water as a symbol), which is why fish – and other sea creatures – can be interpreted as an expression of the content that exists within our subconscious.

The species of the fish – and how close to the water’s surface this species live – can tell you something about how deep within the layers of your subconscious the dream originated from, and overall what the fish in your dream is a symbol of.

Most fishes are a part of the human diet and as an extension of that; fishes in dreams are often seen as a symbol of psychic nutrition (in addition, see food).

In many parts of the world, the fish has a direct link to Jesus – as an example; in the U.S.A. it’s not uncommon to see a car with a sticker of a fish plastered onto its rear. A sticker saying, “I believe in Jesus Christ”.

Since the fish has its origins in the deeper layers of our psyche and can at the same time be interpreted as a strong symbol of psychic (spiritual) nutrition, dreams about fish can be seen as signs of renewal or outright rebirth.
–
When trying to understand your dreams it is important to know that your dreams are… your dreams. As such, you are the best person to figure out the true meaning of your dreams.

My online course “Unlock your DREAMlife” gives you a great foundation for understanding (and recalling) your dreams.
–

If you dream about a fish that appears to be special, as in possessing a special appearance (positive) or perhaps is even glowing, it can be a symbol of the self, the person you are deep inside, and the person you have a chance to become, if you free yourself from the various thoughts and structures hampering you.

I once dreamt a dream about a very colorful and extremely gleaming fish, struggling to breathe as the seawater it was lying in was dirty and contaminated.

To me it was, back then, a symbol of a near extinct musicality and creativity that otherwise were a huge part of me (a part of my sense of self). Today I also see it as a symbol of the near extinct spirituality I felt as well.

If you dream about being eaten by a large fish or a whale it can be a symbol that your life is currently being consumed by your unconscious, that you more or less have given up because your life lacks conscious control. As such you’re very unconscious about your thoughts, conversations and actions.

You could also be going trough a phase where you’re experiencing many depressive thoughts. At the same time it may be necessary for you to experience this, so that you afterwards can be “spit out again” and be reborn.

Similarly to the widespread myth about Jonah and the whale, wherein the whale saves Jonah’s life by swallowing him and when it spits him out again later he’s greeted by a new and better life.)

The species of the fish/sea creature can also tell you something concrete. Sharks and killer whales are typically aggressive predators – and they can be a symbol of strong destructive forces within you.

It can be either something that’s “eating you up” from the inside, or be representative of some very strong and uncontrollable emotions – that for example could be tied to jealousy, envy or unconscious anger – which you direct towards people in your waking life without knowing why.

On the other hand, dolphins are known for their empathy (the ability to put yourself in someone else’s shoes) and ability to communicate.

NOTE: Interpreting dreams isn’t always easy and if you dream about fish it’ll almost certainly mean something different to you than it does to others dreaming of fish (or other sea creatures). A good way of knowing whether or not a given interpretation of your dream is correct, is if you feel moved by the interpretation, and can feel it in your gut – that you can see it making a lot of sense in your life at the moment.

Category: General
How to stay playful and creative throughout life – a bulletproof method! Read more
15.06.2022

Category: General
Why did I go to see Barack Obama (and pay quite a lot of money for it)? This is why. Read more