How you are losing your best ideas every day (or rather, night!) – and how to avoid it 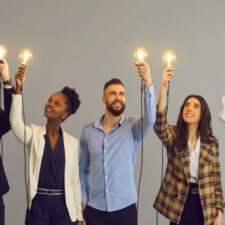 Note: This is the first of many newsletters on proactive utilization of nocturnal dreams – your sleeping intelligence – for thriving better and becoming much more creative at work. Make sure you subscribe to the newsletter to be notified on future issues (published bi-weekly).

Imagine this. On Monday you discovered how to make the world’s fastest search engine (leading you to later launch Google). On Tuesday you wrote “Yesterday” (the song). On Wednesday you came up with the missing piece in the logical organization of all the elements (later making you worldfamous for being the brain behind what was later to be called the periodic table).

On Thursday you figure out that the deeply unconscious driver behind all that you do is the search for approval by your father (big one!). On Friday you finally figure out how you want to finish the story line in one of your biggest and best-selling horror novels (“It”, that later became a famous horror movie also containing “Pennywise”, an extremely scary clown).

Most people would now rest for the weekend. Not you.

On Saturday you discovered the molecule structure of Benzene (a huge breakthrough in the world of organic chemistry). And on Sunday, you create a peaceful revolution against a controlling regime in India. And on it goes the following week.

And now add this; you do all of this while sleeping!

Well… A plethora of worldknown breakthroughs and discoveries like this would most likely never happen within a week (especially not as they happened in different time eras with many years in between), and especially not for the same person. But it is a fact, that all of these breakthroughs occurred while the actual “inventor”, the person behind, was fast asleep.

Google-founder Larry Page one night woke up with a revolutionary way to index Internet data in his mind. He quickly got up and wrote it down, and later – together with Sergey Brin – launched Google.

Paul McCartney one night woke up with the most beautiful melody in his head, and immediately went to his piano to start playing, and write down the notes. Dmitri Mendeleev found the logic of the organization of the elements (the structure of the periodic table) – in a dream.

Barack Obama (yes, the former US President) discovered through a dream where his father shows him he loves him, that most of his life up until then he had been running fast and working hard, very much because of an unconscious need to finally get the approval of his distant (and at that point in time, dead) father.*

After this discovery he started developing a more authentic version of himself, also becoming a strongly autenthic leader.

Stephen King couldn’t figure out how one of his most famous novels, “It”, should end. He went to bed praying that the ending would come to him in a dream. It did, on the same night. And he “copy-pasted” all of the dream-scene happenings into the book, word for word, nothing changed.

Friedrich Kekulé dreamt of a snake eating its own tale, and immediately woke up finally understanding how benzene was structured in loops of six carbon atoms (“benzene rings”). Gandhi (Mahatma Gandhi) got the idea for the famous country-wide hunger strike that started the peaceful protest against British rule in India, in a dream.**

Please note; all of these dreams were recalled dreams. Why is that central? Well. If not recalled, these ideas would simply be lost (most dream ideas never surface in waking consciousness if no dream is recalled, and if we have no ongoing habit of tuning in on/proactively using our dreams).

From dream socialization research we know that many lose contact with their sleeping intelligence around age 10.*** This means that from that age they have a harder time recalling their dreams. Dream socialization is all about the importance of how our parents approached our dream sharings when we were kids, for our ability to recall our dreams as adults (more about that in the next newsletter).

And now make this thought; Just how many brilliant ideas and solutions to (business) problems are lost every day across the globe simply due to the fact that most of us have a hard time recalling our dreams?

The good news is that it is quite easy to re-establish contact with your sleeping intelligence, i.e., to once again start recalling your dreams. And it does btw. involve more than simply writing down your dreams, because what if there is nothing to write down?

It starts elsewhere, and primarily with a sincere desire to discover the power of your dreams. To learn how to develop that desire (and specific input on how to much better recall your dreams), please see my next newsletter.

DO subscribe to this newsletter to be notified when the next is out. And do like and share it, so that more people can learn how to utilize the power of their dreams. Also know that what I do for a living is to inspire leaders and employees on how to much better utilize their sleeping /unconscious intelligence: www.michaelrolsen.com (also in Danish: www.michaelrohde.dk).

Also know that I am originally trained in business (Msc in International Business / cand.merc. IBS), later acquired a Bachelor of Psychology (Lund University). I used to work in various leadership roles within sales and marketing in the pharmaceutical industry (American Eli Lilly, 8 years, also in US and in Singapore), then as a global trainer in project management and leadership (consulting industry, 5 years), since 2012 as a speaker, author and scientist focusing on spreading the message on the power of dreams (in my own company, DreamAlive).

**This and many more examples of major (famous) discoveries made in dreams are recounted in “The Committee of Sleep” (Oneiroi Press, 2001), written by Harvard researcher (Ph.D.) Deirdre Barrett.

***Bachner et al “The effects of dream socialization in childhood on dream recall frequency and the attitude towards dreams in adulthood: A retrospective study” – International Journal of Dream Research (2012)