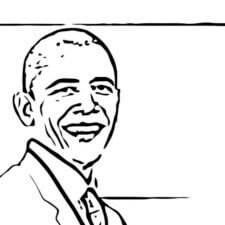 During the Christmas season I read “Dreams from my father” (Barack Obama, 2004), Obama’s acclaimed and very powerful autobiography.

I knew that Obama actively use his nightly dreams to understand himself, and through this, become better at what he does.

Amongst others being the President of the U.S.A (which he was until the 20th of January, 2017). But also being a father, husband to his wife Michelle etc.

Obama’s use of his dreams are a topic that dream researches have written a great deal about. But that he was SO much in to it surprised even me!

Obama’s dream about his imprisoned father

“Wow – he’s really all in on his dreams!” I thought after reading a detailed description of a dream Obama had from his book.

It was a dream wherein his father (who, moreover, is also named Barack Obama just with the title of Senior at the end), was in prison.

In the dream there was a brisk debate (between the defense attorney and the judge, the scene is a courtroom), about whether or not his father should be freed.

Obama (Junior) ends the description by writing that of course the dream was about his own internal struggle of forgiving his father for not having been a part of his life and upbringing.

About how he’s both the judge and the defense attorney in the dream – and because of that, it was an illustration of his own inner dialogue.

But the dream was about more than just that. It was about something much more important to him.

It was about setting free the part of himself that was like his father.

About integrating the strengths of his father, in his own behavior and appearance.

These were, among others, strong leadership abilities, which he otherwise didn’t want to acknowledge because it reminded him too much of his father.

To put it mildly, the ability to lead has come into play in what he did, and still do. Being the President of the U.S.A isn’t an insignificant job.

(Which of your unconscious strengths aren’t you using during your daily life or at work? Consult your dreams…)

The power of understanding our dreams

I realized that Obama being that active a user of his dreams wasn’t that big of a surprise to me after all.

He’s damn good at what he does (my humble opinion) and I highly recommend giving his autobiography a read.

In the book you’ll not only come to understand how Obama actively use his dreams but it’s also made clear that his view of the world is very nuanced.

Partly because he spent five years of his childhood in Indonesia together with his Jewish-American mother Ruth and her Indonesian husband Lolo. But of course, not only that.

The power of understanding our dreams grants us a considerably heightened sense of self-knowledge.*

And as the research of dreams – and other branches of research – concludes; the more we know and understand ourselves, our strengths and weaknesses, the more confident and strong we become – in our workplace and in everything else we do.

Am I saying that you can’t be good at what you do if you don’t understand and use your dreams? No, of course not.

I’m just saying that you could become even better at what you do by actively working with your dreams.

Category: General
How to stay playful and creative throughout life – a bulletproof method! Read more
15.06.2022

Category: General
Why did I go to see Barack Obama (and pay quite a lot of money for it)? This is why. Read more