Why did I go to see Barack Obama (and pay quite a lot of money for it)? This is why. 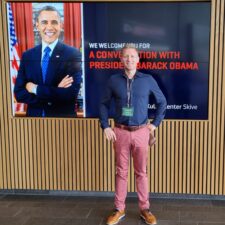 As the TV-reporter from the regional TV-station asked me yesterday when Barack Obama was visiting a smaller city here in Denmark for his fundraising event “A conversation with Barack Obama”: “Why have you come all the way from Copenhagen to take part in this?”
Well. Yesterday the answer fell short and sweet. Here I want to elaborate a bit by also including elements of a nocturnal dream Obama had a point in his life. A dream from which he woke up crying.
Crying as he for the first time mourned the death of his father. But also crying because something of utmost importance had fallen into place. Something he had been searching for for a long long time.
As for the dream itself – I’ll skip to the last part of the dream, a dream he had some time after his father had suddenly died in a car crash:
Barack Obama in the dream sees his father sitting in a prison cell, and this is where he meets him. His father appears thin and fragile. His father approaches Obama and tells him how amazed he is at how tall he is. And he tells him how much he has always loved him. Barack then approaches his father and hugs him, after which Barack starts weeping.
He wakes up crying.
Now there is much to say about a dream like that. Something that of course would involve a more detailed account of the challenged relationship between Barack Obama Junior and Senior (yes, his father’s name was also Barack Obama). I’ll leave at this for now (as laid out in Barack’s 2004 Biography “Dreams from my father”):
This dream stopped what for many years had driven Barack Obama (Jr) to work enormously hard, without really knowing why. It stopped a life-long search for approval from his father.
So back to the reporters question: why did I go to the event yesterday?
I admire a leader – actually a former president of the US! – who openly speaks about how his nocturnal dreams – and his own deep work with them – has played a central role in him reaching his goals. Among other things by coming to terms with what has otherwise caused deep inner turmoil.
And yes. I do have a dream of interviewing Barack on how dreams have played a major role in his life. And yesterday I got a bit closer to that dream. More about that later.
If leaders across the globe would utilize their sleeping intelligence – i.e. try to understand why they dream what they do, the world would be a better place. Simply because those leaders would suddenly on a very deep level understand what is truly driving them, and they – like Obama – would come to terms with their inner monsters, and find deep inner peace. They would become better leaders.
It is by the way easy to re-establisch contact with your dreams, i.e. recall them, and it of course involves more than “writing them down”, because what if there is nothing to write down?
I would love to come inspire you and your colleagues on how to proactively use your sleeping intelligence (see my corporate talks), not just for personal insight, but for enormous creativity as well.
previous post
next post